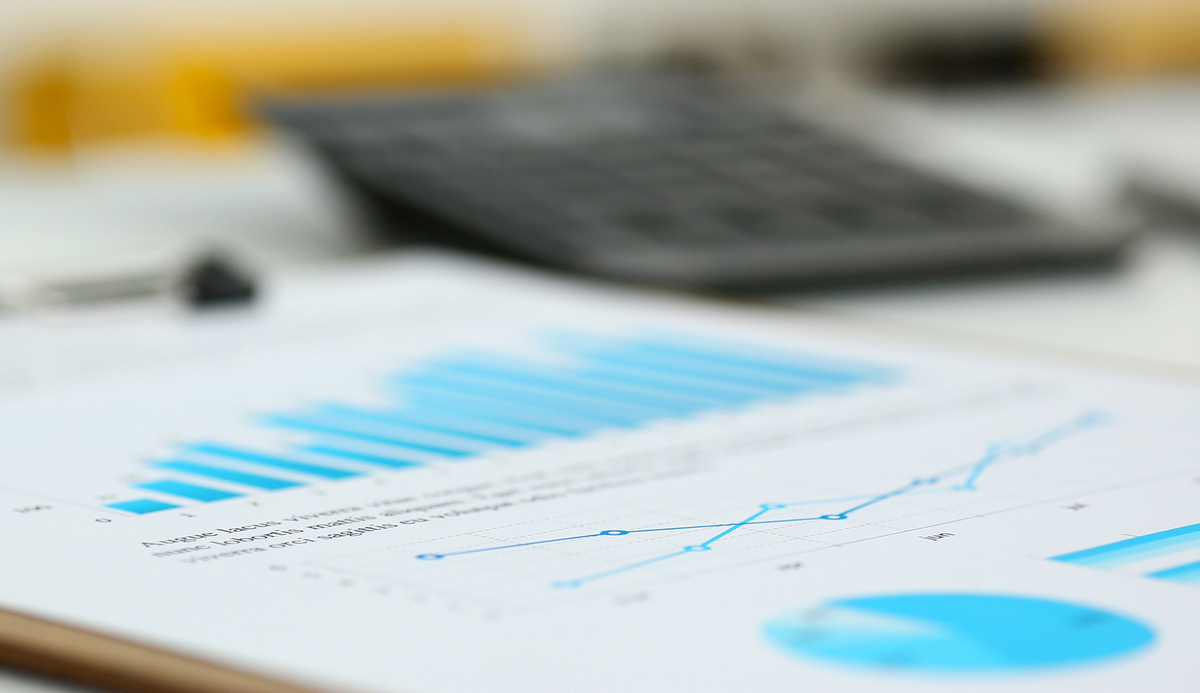 We believe the 2008 financial crisis was caused by too much leverage, specifically in the financial sector. The average total debt held by S&P Financials was approximately six times their equity1. In the US today, banks have done their part in deleveraging and this ratio is now approximately one for one1. The Federal Reserve’s response to the crisis was to lower rates to essentially zero to encourage spending and borrowing to stimulate the economy. Both businesses and the government seem to have quickly seized the opportunities created by cheap debt.

Companies within the Russell 2000 index, an index made from small cap companies, have seen a significant buildup in the amount of debt they have accumulated since the financial crisis1. The following graph shows the significant increase in debt, and the poorly correlated increase in EBITDA (earnings before interest, tax, depreciation and amortization): 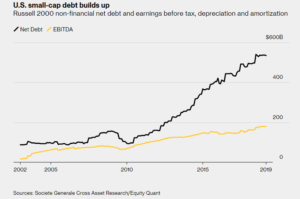 The ability to borrow extreme sums of money at very low interest rates keeps the financial burden of repaying those sums low (however, the risk then becomes refinancing that debt if interest rates rise). This low financial burden has allowed companies to move up in the credit rating into the BBB space, which now accounts for more than all A-rated debt1. Additionally, previously A-rated companies have also taken advantage of the low interest rate environment and taken on significant sums of debt causing a deterioration of their financial ratios, thus incurring a downgrade into the BBB space. Having a BBB rating is the last level of investment grade debt. Any lower of a rating and it becomes classified as “junk”. Here is a graph showcasing the rise in BBB rated companies: 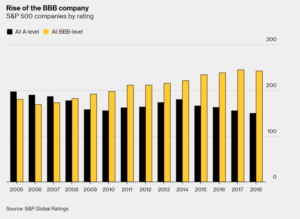 Just as companies have seized this opportunity to take advantage of “easy money”, or low interest rate monetary policy, the government has also participated. Deficit spending in 2018 hit $779 billion dollars, and is on pace to hit $1 trillion next year2. The graph below illustrates the interest payments made on the national debt dating back to the 1940s: 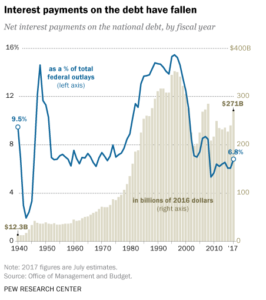 The total amount of US national debt now sits at $22 trillion2. However, because interest rates have been so low for so long, the burden of that debt is similar to the burden experienced in the early 70s, even though the dollar amount of debt is substantially higher. If the Fed decides to raise rates, the burden will be felt by both corporations and the government, as more and more resources must go into servicing these debt payments.

Bloomberg has written an article about how this shift in leverage has been made over the last decade. It discusses how corporate borrowing has soared and quality has fallen. It also outlays what Europe has done, or rather hasn’t done, in terms of reducing their leverage. Additionally, they also discuss what China has been up to and question if their expansive growth in borrowing is sustainable. To read that article, click here.

10
May, 2019
Low-Maintenance Plants that Improve Your Health

29
April, 2019
The Link Between Gum Disease and Other Diseases

Gum disease, also called periodontal disease, is an inflammation of the gums, and it can breakdown the bone tissue that holds the teeth in place. It’s a generally painless disease that gives few warning signs in its early stages, but it can inflict damage to your oral health and other areas of your body.