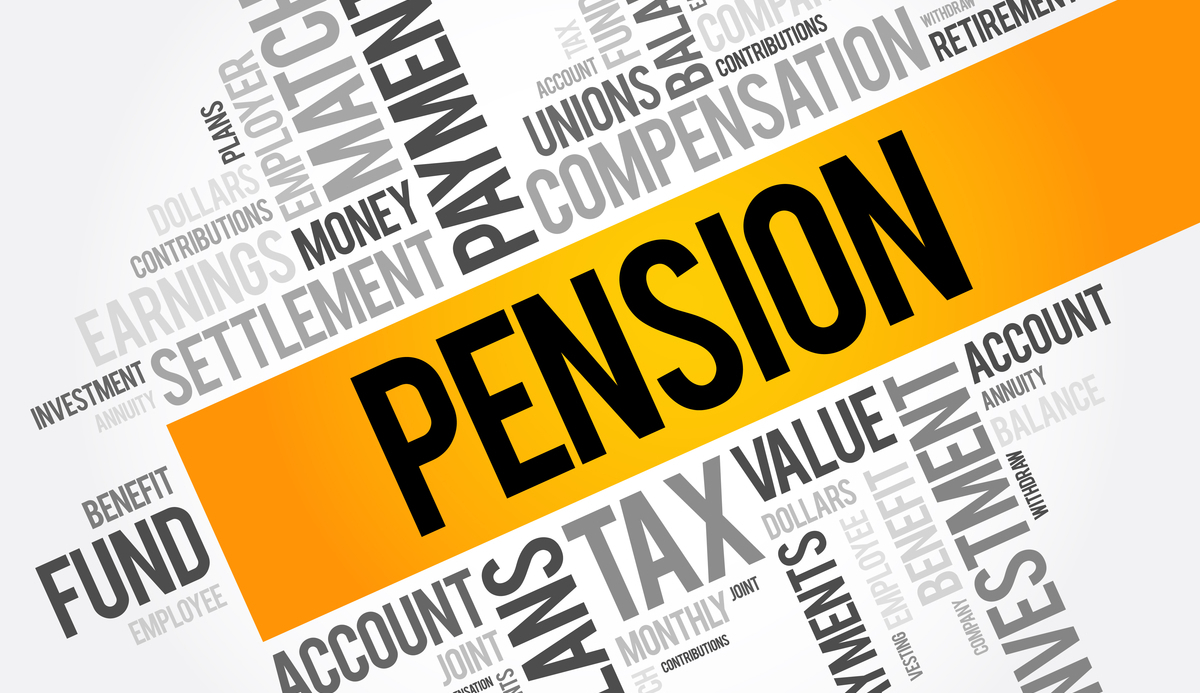 The Risk of Pension Liabilities

What is Pension Risk?

One of the macroeconomic areas of risk to the economy is public and private pension liabilities. The former also has an effect on the municipal bond market. The risk to the public and private pension system is underfunding. This happens when a pension fund has liabilities on its balance sheet which outweigh its assets. This occurs when the actuarial assumptions for inputs like investment returns are too high, future contributions are too low, life expectancy is underestimated, etc.

Consider CalPERS the nation’s largest defined benefit pension fund, which carries $326 billion in assets as of June 30th 2017 and a $477 billion liability making it 68.3% funded for FY 2015/2016 (PERF). This means CalPERS has a deficit of approximately $151 billion. These are ways this issue can be resolved:

1. CalPERS increases contribution requirements on municipalities.
2. Future investment returns are enough to make up the variance.
3. Operating expenses of the fund continue to be cut.
4. Benefits are reduced.

CalPERS’s increase in contribution requirements is sustainable in the short run but might not be sustainable in the long term. If CalPERS continues to increase its contribution demands, CA municipalities may be forced to cut services like law enforcement, road repairs and education in order to make the payments or file bankruptcy like the City of San Bernardino and Stockton did in 2012 which impacted their municipal bonds.

Public pensions on average assume 7.75%* return on investments. This assumption also has the effect of making CalPERS’s liability look smaller than it would be if a lesser rate of return were used. To this point, Stanford’s California Pension Tracker estimates CalPERS liability would be a $992.4 billion if a rate of return of 3.25% were used.

Though CalPERS alone represents a risk, how are other states faring in terms of funding? 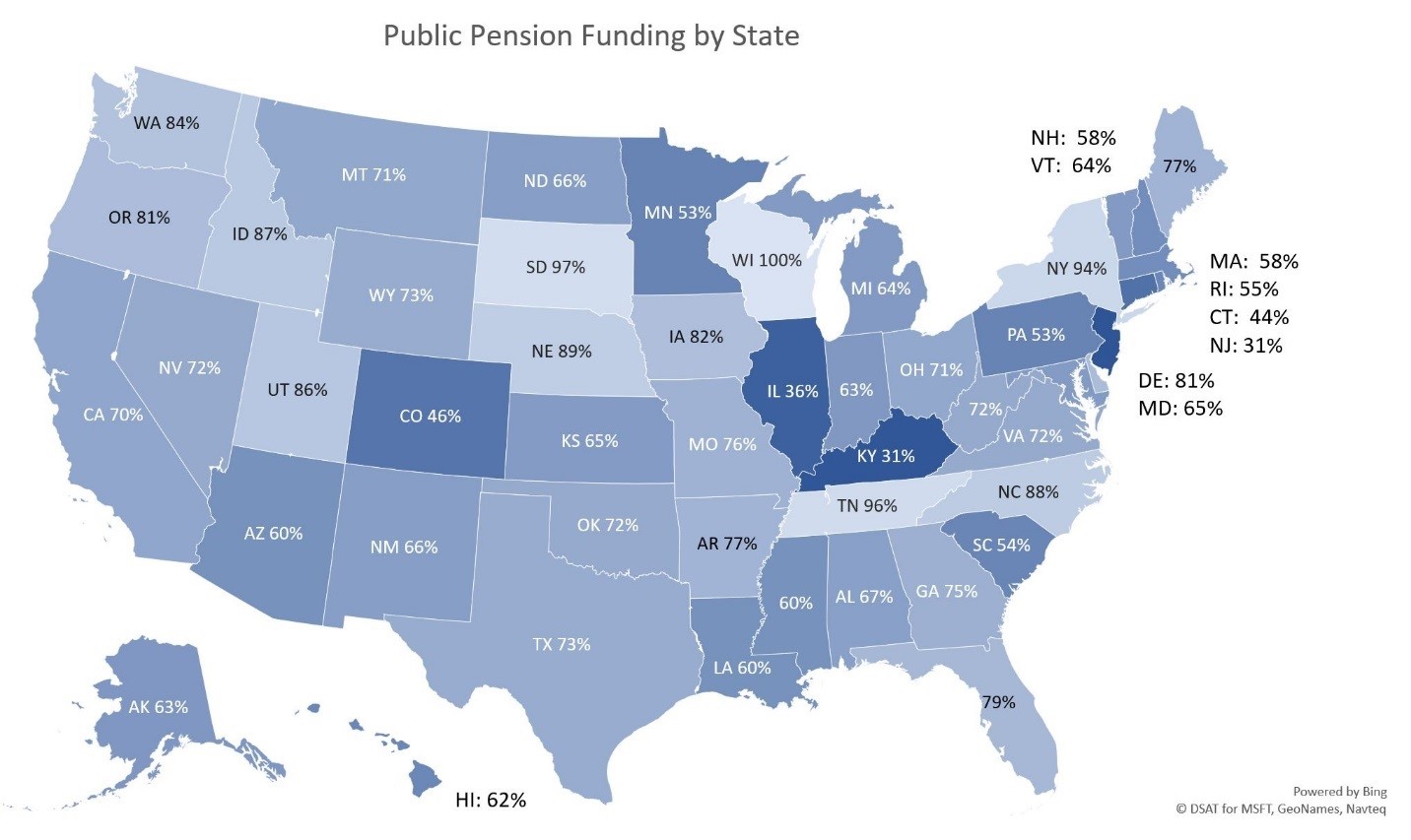 Some states appear to be handling their pensions responsibly, however, residents of states such as Illinois, Kentucky, New Jersey and Colorado should be worried about the longevity of their retirement funds. Collectively, the public pension deficit across the United States, according to publicly available 2016 data, amounts to $1,393,400,000,000. And that assumes a 7.75% average rate of return. Any return less than 7.75% and that liability grows.

As for private pension plans, an article from Bloomberg titled “S&P 500’s Biggest Pension Plans Face $382 Billion Funding Gap” By Brandon Kochkodin and Laurie Meisler dated July 20, 2017 said “People who rely on their company pension plans to fund their retirement may be in for a shock: Of the 200 biggest defined-benefit plans in the S&P 500 based on assets, 186 aren’t fully funded. Simply put, they don’t have enough money to fund current and future retirees. The situation worsened for more than half of these funds from fiscal 2015 to 2016. A big part of the reason is the poor returns they got from their assets in the super low interest-rate environment that followed the financial crisis. It’s left a hole of $382 billion for the top 200 plans.”

In addition the Pension Benefit Guarantee Corp (PBGC), a non-profit corporation that functions under the jurisdiction of the Department of Labor, that guarantees the payment of certain pension benefits under private defined-benefit plans that have been terminated with insufficient money to pay benefits, is underfunded. The Pension Benefit Guaranty Corporation FY 2016 Annual Report stated “Multiemployer defined benefit plans provide retirement security to more than 10 million participants and their beneficiaries. But PBGC estimates that plans covering about 10% to 15% of the 10 million multiemployer participants are at risk of running out of money over the next 20 years and that PBGC’s multiemployer insurance program is likely to run out of money by the end of 2025. Insolvency of PBGC’s multiemployer insurance program would devastate not only the retirement benefits of the 1 million to 1.5 million participants and their families in these at-risk plans but all the participants in multiemployer plans that are currently receiving financial assistance from PBGC as well.”

Conclusion
The above information is why we at SFG look at Public and Private Pension Underfunding as one element of the debt risk to the economy. We believe one possible scenario to the next economic downturn will be connected to some form of debt, just as mortgage loans were to the over-leveraged system in 2008-2009.

*CalPERS announced in December 2016 their intention to incrementally reduce their assumed discount rate to 7% by 2020.

To help protect your family and your property, it is important to avoid known causes of fire, install proper fire detection and prevention in your home, and practice your family escape plan, so you know what to do in case of a fire emergency.

To help prepare yourself during storm season (hurricane, tornado, severe thunderstorms), what precautions should you take when planning your travels?

07
January, 2018
Staying Secure on the Internet of Things

The expanding Internet of Things (IoT) is defined as “The interconnection via the Internet of computing devices embedded in everyday objects, enabling them to send and receive data.” While this sounds like we are living in the future, most of us in fact use the IoT without even thinking about it. Read this article to find out how to use these great advances while safeguarding your data, your family and yourself.